Familiar and familiar with the muted plumage, it is easy to take the Eurasian tree sparrow for granted. But a cautionary story from history shows how important this bird is and how many times you don’t appreciate what you have until it’s gone. From “Through the Lens,” Fujingaho Magazine, February 2021.

“Through the Lens,” Fujingaho Magazine, February 2021

The Eurasian tree sparrow Passer montanus is one of the most famous birds for Japanese and has been deeply involved in our lives since our ancestors started growing rice. However, because they are extremely cautious, it is unexpectedly difficult to get a good picture of them. The photos I’m showing you this time are the only ones I was able to take while hiding in a small tent or hut. Their colors are rather gloomy, but as shown in the photos, sparrows look beautiful in winter, with a slightly fuller body than usual.

Eurasian tree sparrows are charming and familiar birds, but they were belittled as vermins that feed on rice, and so conflicts with humans persist to this day. But they are also useful birds, because they are omnivores and feed not only on rice, but also on pests. In 1958, Mao Zedong, the then chairman of the People’s Republic of China, started a campaign entitled “Big Leap Forward”, in which he called “four pests”: rats, flies, mosquitoes and sparrows – on the grounds that the first three transmit Diseases and the final kiss on grain – and continued the campaign to eradicate these pests completely. All people were mobilized to exterminate sparrows. They chased sparrows by making loud noises with pots, frying pans, and basins, and caught those who grew tired and fell to the floor. Several hundred million birds are said to have been exterminated.

A major outbreak of locusts then followed due to the drastic decrease in the number of sparrows that were expected to eat. The rice harvest production declined and as a result tens of millions of people died of starvation. The writer Jung Chang described the “Smash Sparrows Campaign” in her well-known novel “Wild Swans” as a childhood memory of her own. Sparrows have been said to regain their reputation and have been removed from pest lists. Instead, bugs were added.

Live fairly close to humans, sometimes viewed as vermin; Always keep a certain distance from people and never get used to them – these are the characteristics of sparrows. Anyway, they visit the birdhouses in my garden after other birds do. They eat hastily and keep an eye on their surroundings. I scatter food in the garden occasionally and watch it from inside. First a single sparrow comes to explore the area, then groups fly down one after the other, but as soon as I move even a little they all fly away at once, flapping their wings surprisingly loud. Care must be taken with sparrows that live in cities, residential areas and places near villages. In a sense, they can be said to have survived by building nests in buildings and thus using human habitats wisely. 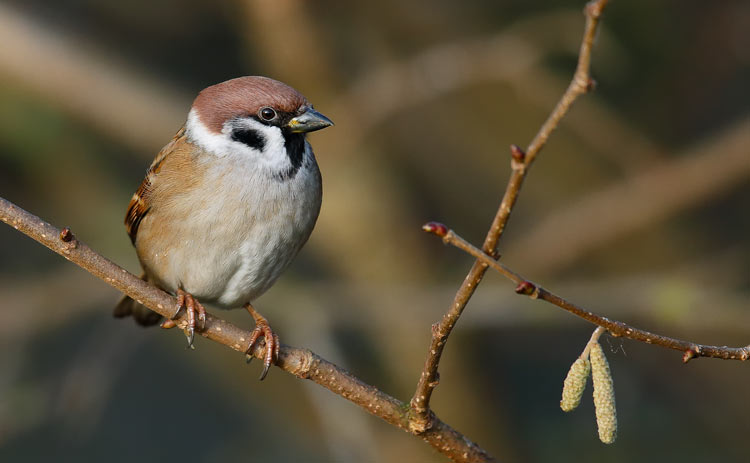 Sparrow “is one of the seasonal words in haiku. The sparrow chick is associated with spring, the rice sparrow with autumn and the plump sparrow with winter. So they accompany us all year round in our lives. As you can see in the header, on cool winter days they balloon their feathers and form layers of air to hold the heat. As a result, they look plump and plump in Japanese – fukkura. The word Fukkura is related to another similar word, Fuku, which means luck. This is how “chubby sparrow” became a happy bird in winter, symbolizing wealth and happiness.

The Covid-19 pandemic appears to have had a negative impact on the Japanese economy. I hope Fukkura sparrows play a role in encouraging us to contribute to our future prosperity.